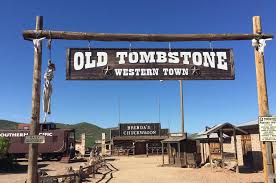 Tombstone is a historic city in Cochise County, Arizona founded in 1877 by a prospector in what was then Pima County, Arizona Territory. It became one of the last boomtowns in the American frontier. The town grew significantly into the mid-1880s as the local mines produced $40 to $85 million in silver bullion, the largest productive silver district in Arizona. Its population grew from 100 to around 14,000 in less than seven years. It is best known as the site of the Gunfight at the O.K. Corral and presently draws most of its revenue from tourism.

Under the surface in the mining town were tensions that grew into deadly conflict. The mining capitalists and the townspeople were largely Republicans from the Northern states. Many of the ranchers (some of whom were also rustlers or other criminal varieties) were Confederate sympathizers and Democrats. The booming city was only 30 miles (48 km) from the U.S.–Mexico border and was an open market for cattle stolen from ranches in Sonora, Mexico, by a loosely organized band of outlaws known as The Cowboys. The Earp brothers as well as Doc Holliday, arrived in December 1879 and mid-1880. The Earps had ongoing conflicts with the Cowboys. The Cowboys repeatedly threatened the Earps over many months until the conflict escalated into a shootout on October 26, 1881, the famous Gunfight at the O.K. Corral.

SBRanchRealty.com is a Real Estate Brokerage that specializes in sales within the 55+ Communities of Arizona.

Both Douglas Sedam and Lynn Baker are here to guide you through selling your existing residence and/or buying your next for-ever home.

Doug Sedam was awesome to work with and I learned a great deal about both selling and buying a home. Both transactions were seamless in that what occurred was exactly according to the plan Doug originally proposed.

Lynn Baker has been so wonderful to work with.  He has listed our home here in Arizona and is doing a fabulous job.  We actually own a Real Estate company in Oregon and know a great agent when we find one.  Lynn is such an honest and hard-working Realtor.  Look no further...he's your man!

We were referred to Doug Sedam by a close friend of ours that has used his services many times before.  Working with Doug was an incredible experience and he is now our Realtor for life!

Doug Sedam was a joy to work with during the sale of our home. We had never sold a home before and Doug guided us through every step of the process to what was a very close of escrow.  We are truly grateful for all the hard work that Doug did in getting us out of a home that we thought had very little equity.  He was able to get us top dollar for our home.  He did this by effectively marketing the home, and bringing a buyer, which resulted in an even greater reduction in total commissions paid out.

Lynn Baker constantly works hard for the sale of our home.  His professionalism is exhibited by his manners with us and the buyers coming to the numerous Open Houses he holds.  Always a positive attitude, no hard sell, just an ethical, down to earth common-sense approach to the outcome we all want.  As his clients we could not ask for anything more.  Both my wife and I highly recommend Lynn and SBRanchRealty for all your real estate needs.

The data relating to real estate listings on this website comes in part from the Internet Data Exchange (IDX) program of Multiple Listing Service of Southern Arizona. IDX information is provided exclusively for consumers' personal, non-commercial use and may not be used for any purpose other than to identify prospective properties consumers may be interested in purchasing. Listings provided by brokerages other than SBRanchRealty are identified with the MLSSAZ IDX Logo. All Information Is Deemed Reliable But Is Not Guaranteed Accurate. Listing information Copyright 2020 MLS of Southern Arizona. All Rights Reserved.
Saddlebrooke Ranch Photo Gallery